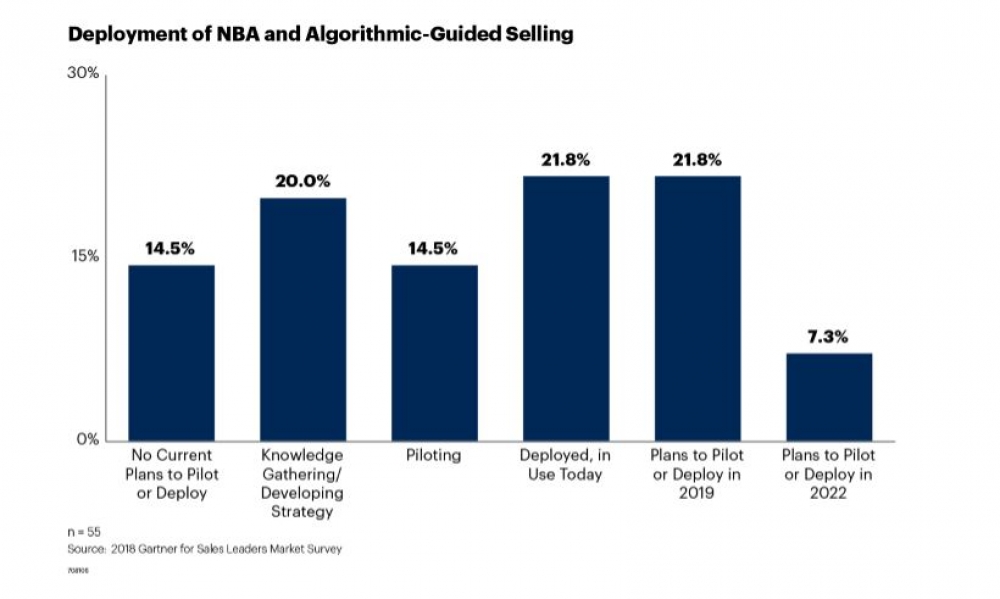 While algorithmic-guided selling is a newer concept and implementation of these types of tools are only just starting to ramp up, a new report from Gartner’s 2019 Market Survey, titled: Current and Emerging Technologies in Sales, shows that the B2B world is ready. In fact, 51% of sales teams have or plan to deploy algorithmic-guided selling within the next five years.

Although algorithmic-guided selling sounds like a simple solution to daily sales tasks, it isn’t a one-step process and important factors come into play for it to run smoothly. Companies should ensure that they are prepared to harness tools with this type of selling before implementing it, as it usually relies heavily on clean and consistent data.

I had a chance to chat with Tad Travis, VP of Research at Gartner, to discuss what manual sales tasks can be automated for sales with these types of tools, how much accurate data plays a part and which companies are selling these solutions.

“Predicted algorithms [within automation vendors] are uncovering predictive signals that might determine whether the health of an account or of a deal is trending up or downward, depending on recent actions taken or even the absence of certain actions,” Travis said.

ADVERTISEMENT
These tools will do two forms of work: manual data capture and helping decide next steps for a deal. Sellers can save time spent capturing data by using the tool to capture discussions in meetings for them. According to Travis, captured meeting discussions strengthen the quality of interaction data to enhance the operation of the algorithm.

“The other part of manual data entry is that there are algorithmic tools that will capture the occurrence of the meeting and immediately associate it with relevant records in the CRM system,” Travis added.

Some algorithmic-guided selling tools can also push forward recommendations about what to do next by recommending who to call or what content will get a cold lead’s attention based on the content's established success pushing other deals.

Implementing algorithmic-guided selling tools seems like an obvious solution to solve day-to-day tasks that sales reps typically do manually, but is your company’s data ready?

This type of selling tool thrives on accurate, reliable data for it to work. Travis recommends companies have 18 months of clean and consistent data to witness the algorithm operate at its true potential. “Eighteen months makes sense because it helps take out some of the seasonality of market performance, which might influence how the algorithms operate,” he said.

With tech that aims to take care of time-consuming tasks on the rise, Travis believes sales organizations that want to be more data-driven are prepared to take on algorithmic-guided selling. However, other areas of the B2B world are already there.

Travis noted companies such as Highspot, Showpad and Seismic have these types of tools, as well as companies like Outreach and InsideSales in the sales engagement field. There are even some companies, such as People.ai, taking a holistic approach to look at customer interactions.

“We definitely see different types of tools for content management,” Travis said. “There are many tools doing algorithmic recommendations of what content to distribute.”