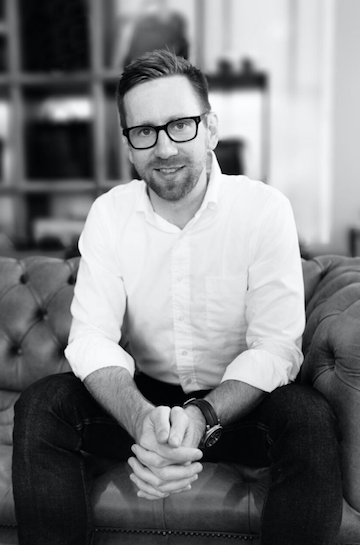 We’ve entered the Infinite Media Era, and context — not content — is now king. In this era, when standing out in a sea of generic messages across various digital channels is harder than ever, traditional B2B marketing practices will no longer suffice, according to Mathew Sweezey, Marketing Futurist and the Principal for Marketing Insights at Salesforce.

Sweezey believes that it is time for B2B brands to revolutionize the way they engage brands — and ultimately reinvigorate the customer experience. In his soon-to-be-released book, Context Marketing Revolution, Sweezey shares the key elements of context and how high-performing marketing organizations are leveraging these elements to break through. Using analysis and insights from 11,000 global brands, he also offers practical advice to help readers accomplish the same.

I sat down with Sweezey to discuss his views on the new era of the B2B customer and why contextual engagement is now table stakes for resonating with target buyers.

Demand Gen Report: What is the Infinite Media Era?

Marketing plays a significant role in what we would call “consumer motivation.” The goal of marketing is to drive some type of action. We need to start looking at what motivates individuals. And when you start going down this deep scientific and psychological path, you end up in this thing called “media theory,” which is the concept of what we as humans think about ourselves, how we act, how we interact — it’s all really a byproduct of our immediate environment.

Take [the concept of media] into context and say, “our view of the world, how we act and how we interact is dictated based on media.” When I say the word media in this context, we're defining it as a macro-level thing. It doesn't matter what tweet you see — it’s the fact that everyone in the world has the ability to create a message freely from anywhere. Couple that with the fact that the total amount of available content is radically different than it ever has been. So, you start to kind of understand why media is important because it shifts decision-making processes and human behavior. That’s the core reason why marketing has to understand it: How do we motivate people?

We have to understand these core factors.

ADVERTISEMENT
We're all familiar with the concept that marketing really needs to be able to break through the noise to reach somebody to motivate them. So, the question then becomes, how much noise is there in the marketplace? I started tracking noise from different methods started in 1900 and projecting forward all the way up to 2013. It’s essentially a rocket ship, right?As we've had more media, we've had more noise. When you actually start to break down the noise, what you find is there are three different creators of noise now, and our idea of marketing was created at a different point in time. So, we talked about the Infinite Media Era, which means that there are no barriers to creation and distribution. The amount of media existing in the marketplace is infinite.

Demand Gen Report: Why is this such an extreme shift from what marketing was like in the past?

We lived in a limited media environment, which means the creation of media was limited in terms of who would create it. We created and defined marketing, and how we use the discipline to motivate and drive consumer behavior, based on “limited media air.” Prior to the digital revolution, you had to have a lot of capital to create something, which meant there was very little media being created. And most of the “noise” was only able to be created by brands because they had the capital to create whatever those messages may be.

The second aspect of the limitation was the distribution of this media. To distribute any form of media, you had to go through a pre-existing distribution channel, and those distribution channels required you to pony up and pay money to distribute that content. It was not easy to access information and that information did not live for a very long time because it was very hard to get to. So, if you put that into context and say, “If that's the world that a human lives in, how do they make decisions? And how do we use this game of marketing to motivate them to do what we want them to do?” It was a very specific set of parameters. It was a monopoly on media by brands, and consumers didn't have instant access to information, so they relied on different methodologies to make decisions — old methodologies and old games that we would create in play. We believe we motivated people by stealing their attention and getting to the top of their minds. So, when they were forced to make a decision, they would rack their brain to remember us, and then move forward with that decision.

Today, a push notification from a FitBit is more likely to motivate someone. It’s a hyper-personal format of media that has never existed before and it’s specifically created only for that one individual in that one moment to help them accomplish the goal at hand. It breaks through all other noise and goes directly to an individual to drive actions and motivate them in ways that no other format of media ever has.

We now live in an Infinite Media Era. How do consumers filter through that infinite amount of media with an intermediary between an individual and any digital media format? That’s artificial intelligence, which is hyper-focused on making sure that person has the best experience at that moment. And whatever they engage with is what is most contextual, whatever is going to help them accomplish the goal they have right now.

DGR: Your book is focused on the power of context. Why is context now critical to creating amazing customer experiences?

The important part about context is the definition that we apply to it. A lot of people define it as the hyper-targeting of ads based on data. That is a piece, but really, context is the process of helping somebody achieve their goal of the moment. You can start looking at people’s goals of moments at different points in time, right? If someone's on social media, what is their goal? Let’s look at brands that are really breaking through on social media and what works.

DGR: Can you share a sneak peek into how the book details the steps brands need to take to gain better context?

The book really breaks down context in a few pieces: the foundational piece — why does context matter? Then, how do we create context? And there are really five key aspects to context: availability, permission, personal, authenticity and purpose. Any moment that has those five elements wins. Let's just break down one simple element: purpose. Often, it’s a hot topic and we talk about it a lot. But there are radical differences in terms of what people do with it, how people execute on it and the outcomes that they have with it. It's a sliding scale and at the lowest end of the sliding scale is the customer service rep, right? What we find with customer service is this notion that brands are doing good, and then forcing messages out into the marketplace and telling everyone, “Hey, we've done well.” It's a forced message onto the marketplace.

DGR: Can you share an example of a brand applying context to their messaging well?

There's a brand called Kronos that’s on Facebook. If you look at their social media feed on Facebook, you see two radically different things getting engagement. They post blogs that they have published. When you go and look at the end of those blog posts, they're not engaged at all. But now they have a second form of content that they publish on Facebook and it is called “The Time Well Spent Series.” It's a comic series created by Tom Fishburne. They create this and they get 60 times the engagement on those posts that are the comics, because what is the person's goal? What is the context of them being on Facebook? It's not to go read your blog post; it's to escape from their job during their 10- or 15-minute break.

To learn more about the context marketing revolution and how to better implement contextual messages into your go-to-market strategies, check out Sweezey’s book here.