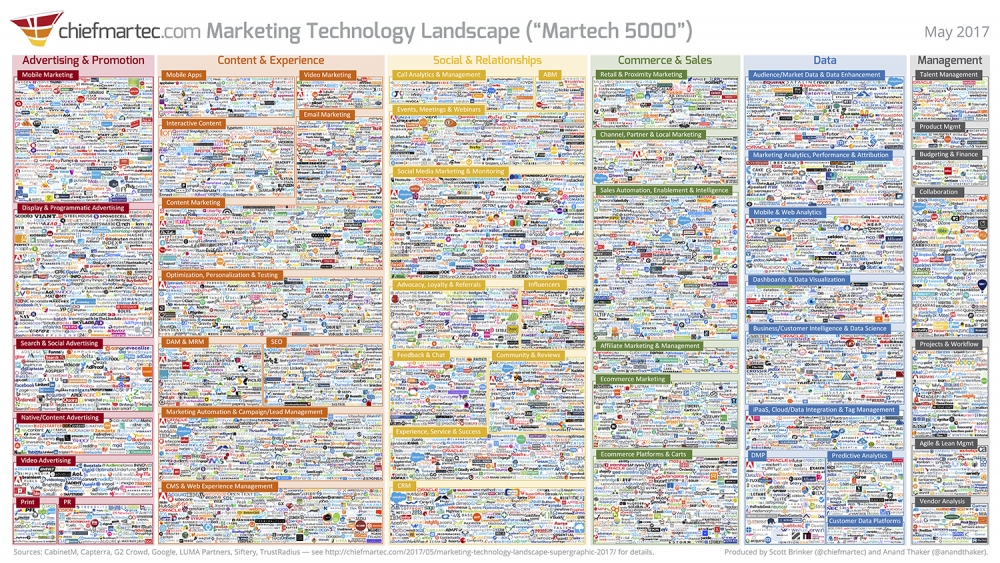 If you (like me) thought that the marketing technology landscape was going to begin consolidating as tech users searched for a healthy balance of integrated technology—you were sadly mistaken. In all, there are more than 5,300 technology solutions according to the newly announced 2017 Marketing Technology Landscape Supergraphic—a 39% increase from last year.

The annual census of marketing technologies, conducted this year by Scott Brinker, Editor of chiefmartec.com, and Anand Thaker, CEO of IntelliPhi, shows that the number of tech solutions increased yet again. The expansion was notably more prevalent in the marketing automation sector, which saw a 5X increase compared to last year.

As more companies entered the market, established brands made consolidation a big trend in 2016 as well. Many companies—from Salesforce to Microsoft, Demandbase, Dun & Bradstreet and more—made a number of  big-money moves to build-through-acquisition their own “super platforms.”

The emergence of these large companies isn’t expected to intimidate new firms from seeking their share of the market.  According to Brinker, the healthy demand for new solutions has positioned the martech ecosystem to continue growing at a steady rate.

Brinker also commented that the ease with which new technology can be built is enabling anyone with a good idea to bring a product or service to market.

“Leveraging infrastructure-as-a-service such as Amazon [Web Services] and Microsoft Azure, open-source software, global collaboration and the incredible array of digital channels and communities accessible for customer development have made it possible for almost anyone with a better idea for marketers to build it and give it a chance to fly,” Brinker said.

Many of the new vendors are a blend of solutions, such as marketing automation, lead management and more, said Brinker during a chat with Demand Gen Report. “Not all [the solutions] are direct competitors. Some are complementary.”

In fact, not all of the companies added to the 2017 census were start-ups, he explained. Rather, some of the newly listed businesses have “either been based internationally, focused in a vertical market or flying under the radar as an earlier-stage startup.”

Marketing teams are eager to investigate the new offerings, Brinker commented. Their expanded responsibility for the larger customer experience lifecycle, and the incredible number of new touchpoints between businesses, partners and customers they need to support, is driving a constant search for high-performing tools.

“The scope of marketing has clearly exploded,” Brinker said. “Combined with the new innovations that keep shifting customer expectations, marketers are continually facing new challenges that they look to the martech ecosystem to solve. Ultimately, marketers want a better experience for themselves, [as well as] a better and differentiated experience for their customers.”

As a result, instead of choosing between a suite from a single vendor or a best-of-breed collection of products from multiple vendors, many marketers are increasingly taking a hybrid approach, according to Brinker. He offered one example from Microsoft, which submitted its tech stack for a Stackie Award.

“It demonstrates how a heterogeneous, best-of-breed marketing stack can be conceptually cohesive — orchestrating a diverse set of technologies in a coherent architecture,” Brinker said.

This year’s supergraphic shows that the martech landscape shows no signs of slowing down. Here are some other figures it reported:

Want to check out the 2017 Marketing Technology Landscape for yourself? Click here to view the full Supergraphic and let us know what you think about the ever-evolving world of martech in the comments section below!

What's Working In Email Marketing? The Power Of Al…