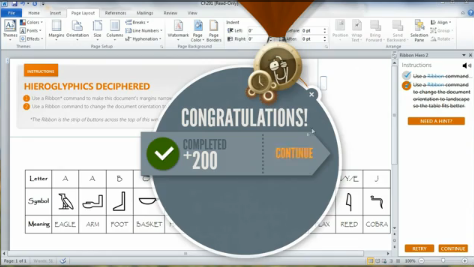 Companies in retail and entertainment have seen success in driving customer engagement with gamification tools. While applications like foursquare, Farmville and even Facebook Places have made brand interaction a game by allowing consumers to collect prizes, points and badges in exchange for coupons and free goods, it’s been difficult to crack the code on how BtoB companies can leverage the strategy to engage buyers.

During the Gamification Summit September 15-16 in New York City, Sarah Faulkner, Program Manager for Microsoft Office Labs, discussed how the development of its Ribbon Hero game helped increase productivity and enthusiasm among users, and helped created consistency across organizations. Office Labs is the arm of Microsoft Office that tests new ideas within the company that will be rolled out online and in new software.

First developed in 2009, Ribbon Hero was designed to create an engaging and fun experience that also allowed companies to efficiently train employees on the Office platform and teach them new features in a timely manner. “We asked how we could make learning Microsoft Office as fun as Angry Birds,” Faulkner said. “What if I can have fun, get that investment back in terms of increased productivity, go home earlier and be able to play more games?”

Faulkner discussed the general brainstorming and rolling out process, which included rigorous testing and on “trial” games and garnering feedback. The Microsoft development team then went on to converge the input into a high fidelity version and added features to amp up overall polish and entertainment value.

“We had three ways users could score points,” Faulkner said. “They could either read the help documentation, watch a tutorial video or they could play a challenge…we noticed that in context of the game, everyone clicked the challenge and we had almost no clicks on help documentation or videos.” As a result, Microsoft featured a number of “tasks” users had to complete to win points, which required them to utilize software features.

After rolling out the first version of Ribbon Hero, Faulkner noted that she and her team noticed that companies that deployed the strategy had early drop-off rates. Although 60% of users who played at least two games went on to play 10, many closed out of the program after only completing two.

To increase use within companies that deployed Ribbon Hero, Microsoft added levels that had a higher sense of achievement, enhanced the overall “fun” component, and developed a narrative and theme surrounding Clippy, the Microsoft mascot.

The second version of Ribbon Hero was released in mid-2011 with rave reviews from users and media outlets. Early usage data revealed that the overall number of users completing at least two challenges doubled. Similarly, twice as many users completed more than 10 challenges, versus the first version of the game. In a user survey, a majority of respondents (80%) agreed it was a great way for them to get familiar with new Microsoft Office features, while 70% said they would recommend the service to a friend.

What's Working In Email Marketing? The Power Of Al…