Social networks are emerging as a legitimate source for generating leads and feeding new prospects into the pipeline. A new DemandGen Report survey concluded in early June found that, while still in the early stage of development, BtoB marketers are building formalized strategies to utilize social networks as a source for driving leads.

The survey, titled “The Social Strategy for Driving Demand,” collected feedback from 218 sales and marketing professionals and found that generating leads has 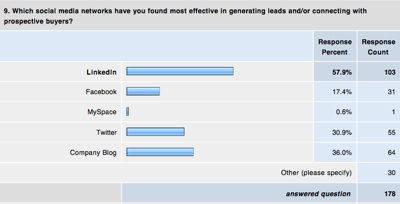 quickly become the top goal for social networking activity. The survey also found that some early adopters are already generating between 10% and 15% of their leads through social media connections, and 35% of respondents expect the number of leads generated via social media to increase by 1%-5% over the next 12 months.

While marketing (cited by 86% of respondents) & PR (54%) departments are driving the most activity in driving demand via social networks, the DemandGen Report survey showed that other disciplines including sales (sales 41%), product management (21%), and engineering (13%) are ramping up their prospecting on social media.

Despite the returns from social prospecting, the survey revealed that the majority of companies are still in the early development stages of integrating social media into their demand generation strategies. For example, 68% of respondents reported that they currently have no budget in place for social media initiatives. Nearly half (46%) described their current investment in social media as in the “experimental stage” and said they are likely under-investing in the media.

In terms of the networks and tactics driving the most success, the survey found that LinkedIn and Twitter were the dominant channels, with 58% citing LinkedIn as most effective in generating leads/connecting with prospective buyers, followed by company blogs at 36%; Twitter at 31% and Facebook at 17%. The specific tactics and strategies proving to be most effective with the social networks included:

The survey also showed that those professionals active in social media are quickly deploying new desktop applications to manage their activity, with 90% reporting use of TweetDeck, 13% using Tweetie and 9% using Digsby.